The Gulf Cup: Much More than Football 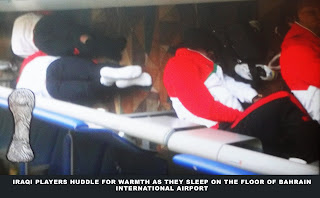 For the Iraqi men's national football team, the road to Aden has been long. After landing in Manama around 7am on a short flight from nearby Dubai, the Iraqi team spend the better half of the day sleeping on the floors of the Bahraini airport, in between chairs, hiding in the prayer room, exhausted, trying to escape the aggressive attitude of air-conditioning and indifference in the Gulf. The Asian champions were waiting to board a connecting to flight to Yemen, where teams from the Gulf are gathering to contest the 20th edition of the Gulf Cup, due to start tomorrow.

The experiences of these Iraqi passport holders traveling at the expense of their corrupt government are in stark contrast to those of their richer counterparts who arrived in the Yemeni capital on chartered flights that flew nonstop from their respective capitals. If the Iraqi government can't organize a direct flight from Dubai to Yemen for a few dozen of the most important people in the country, then Iraqis have a better chance of seeing snow in July than witnessing any improvements on the ground.

Nonetheless, these kinds of trials and tribulations are no stranger to athletes from Iraq. A history of dehumanization at the hands of the own government, whether it was corporal punishment under a maniacal Uday Saddam Hussein, or utter disregard complements of a stubborn and incompetent Hussain Saeed, both of whom have had their ways with misgoverning the beautiful game in Iraq, the country's performance has been nothing short of miraculous.

Only months after the horrors of American occupation, the Iraqi Olympic team took the 2004 Athens games by storm by reaching the bronze medal match only to lose narrowly to a star studded Italian side. This set the Iraqi football machine in motion and drove it to arguably its highest achievement yet: winning the Asian Cup of Nations in 2007.

Since then, however, the Lions of Mesopotamia, as they are commonly known on the streets of Iraq, have had their share of setbacks. An early exit in World Cup qualifications and a string of bad showings at the Gulf Cup have embodied the demise of the game in a country obsessed with everything that is football. This fall from glory has also been accentuated by an anemic domestic league where games are played on rotten pitches to the tunes of fan violence.

As Iraq endeavors to win its fourth Gulf Cup over the next two weeks, the fact that the tournament is being held in Yemen must be somewhat of a relief to a soccer team struggling to hold itself together. In many ways, Aden is very similar to Baghdad. In addition to both cities enjoying a rich history, the two capitals are similar in terms of their political instability. Although matters in Iraq can not be compared to the relative stability in Yemen, the Gulf Cup has been met with protest, violence, and a massive security crackdown.

The hosts are desperate to promote a facade of unity between the North and South of the country which came together in a manufactured merger in 1990 after a tumultuous history of struggle between communist and nationalist elements. Since their unification, a brief civil war in 1994 and a growing movement of discontent from the South have left the country on the brink of complete collapse.

In the weeks leading up to the tournament, rocket propelled grenades have visited the May 22 stadium in Aden twice while thousands of protesters have battled police officers in opposition to any public relations benefits that the Gulf Cup might bring to the governments off the backs of the oppressed. The Yemeni government is also obsessed with proving itself to its richer colleagues in the Gulf and thus taking a concrete step towards greater regional integration.

The security of southern Yemen tells only part of the political saga unfolding ahead of the Gulf Cup. To the north, separatist Houthis have once again flared up their demands by battling with Yemeni and Saudi security forces in what has been an ongoing conflict with regional and international consequences.

Despite a colossal security presence, several players have refused to join their squads, and the sensationalist Arabic media continues to cast its doubts over the safety of the tournament. In many ways, the concerns are legitimate, but ultimately, talk of security or a lack thereof usually stems from a problematic discourse surrounding a country's placement within the American plan for the Middle East. In the diseased spirit of anti-Black racism in the lead up to the World Cup in South Africa, anti-Yemeni stereotyping is also never far from the fear mongering campaign being waged against the tournament being staged in Aden.

This is not in defense of the Yemeni government which has reportedly spent $600 million of the public's money on stadiums and hotels at a time when the population are suffering from chronic failures in health care, education, and all aspects of the country's infrastructure. This is also the same government that is emerging as a new base for America's war on terror.

Nonetheless, Yemenis have historically been regarded as second class citizens in the Gulf. This is particularly true in Saudi Arabia, where tens of thousands of Yemenis live and work for considerably less pay than their affluent employers. In that sense, Yemenis are desperate to reverse a sense of lost dignity through a positive showing from their football team. Therefore, the opening match scheduled between Saudi Arabia and Yemen seems to be the ideal way to set the tournament on fire, figuratively speaking of course.

For the other countries participating in the regional tournament, unrecognized by FIFA, a win in the Gulf Cup is a much needed boost for Football Associations failing to impress their local audiences, even in instances where millions of dollars are spent on soccer. For Oman, the defending champions, a growing generation of gifted players wants to continue a recently found tradition of winning by successful defending their title. In Kuwait, a renaissance of might on the pitch is set to revive historic dominance of the tournament. For the Emaratis, a sleepy decade and a half has passed since the magic of the country's golden generation, and fans will surely look to this tournament to see some light at the end of the tunnel. Bahraini disappointment in the final stages of World Cup qualifications for the last eight years seems to still cast its powerful shadow over a gifted bunch, and a tough tournament is waiting for the island team. Finally, Qatar, with an army of naturalized foreigners, is still unable to find that elusive moment on the pitch to gain some momentum for a country vying to host the World Cup in 2022.

Despite the incentives dangled in front of all the participating teams, there is no greater joy than that which is in store for Iraq if they lift the trophy, coincidentally designed by an Iraqi artist as well. The Iraqi team must overcome tremendous obstacles on and off the pitch to come near any sense of accomplishment in Yemen. However, with the presence of a new German coach, Wolfgang Sidka, who led SV Werder Bremen to victory in the UEFA Intertoto Cup in 1998, and a collection of young hungry players battling for a spot in the squad ahead of the Asian Cup in January 2011 could prove the necessary boost to claim victory.

Younis Mahmoud, the Iraqi captain who has been continuously accused of underachieving against Gulf teams who offer the striker tremendous earning potential, recently told a gathering of Iraqis in Doha that Iraq will indeed win the Gulf Cup.

As Iraqi fans across the world hold their breath in anticipation to see if Mahmoud's words come true, the tournament in Yemen brings with it a slew of added elements that will undoubtedly mean that the real story of the Gulf Cup will be determined off the pitch. This is a trend that is going nowhere anytime soon as the next tournament is set to take place in none other than occupied Iraq itself.

A brief history of Iraqi Football:

1948: Iraqi Football Association established.
1951: Dhia Habib takes charge as first full time coach.
1957: Iraq's first international match played against Morocco in Lebanon, drawing 3-3
1964: Win the first of four consecutive Arab Nations Cups.
1966: Opening of Shaab Stadium in Baghdad against Eusebio's Portugal.
1986: First and only appearance in the World Cup in Mexico, losing 1-0 to Paraguay, 2-1 to Belgium and 1-0 to Mexico.
1991: Iraq banned from the Gulf Cup and Asian Games for more than a decade after the Gulf War.
2004: Storm to fourth place in the Athens Olympics, beating Portugal 4-2, Costa Rica 2-0 and Australia 1-0, before losing 1-0 to Italy in the bronze match.
2007: Jorvan Vieira leads Iraq to first Asian Cup, beating Saudia Arabia 1-0 in the final.
2008: Fail to qualify for 2010 World Cup.
Posted by Ahmed Habib at 12:47 PM